Built in 1866, the historic structure has housed the Christian church congregation for over 150 years. John Evens donated 1.23 acres of land for construction of the Christian Church on August 22, 1856. Receiving the property for the congregation were H.C. Scott, Benjamin F. Smith and Shadrock B. Hancock, Trustees. The deed was filed September 24, 1856. The Pleasant Hill Congregation was organized in 1850 at a get-together of a group of community resident. Charter members of the church included B. Hancock and Levi Tillison, serving as elders and Isaac Scott and A.W. Scott, deacons.

Their first church was destroyed by fire after only a few years. The congregation rebuilt immediately with the current building being dedicated August 4, 1866. Lumber for the structure dedicated in 1866, which stands today, was sawed on a water powered mill, located on the old Nicholson Place, about 2 miles upstream from the church. The building rests on three hand hewn 40 foot beams. The floor is made of hard planed lumber, stripped from beneath. All the pews were handmade and hand planes. Nails in the building are all the old square nails. The foundation, made of hand hewn limestone, contains a governmental geological survey marker. Early church records were lost when the saddle bags were swept from a horse swimming Breton creek.

In 1959, the church dedicated a new basement and Sunday school classrooms. Electricity replace the old Aladdin lamps, gas heat was installed and a belfry erected, donated by Clyde Loomis, then mayor of Potosi. Missouri Pacific Railroad also donated a brass bell. A new basement addition for more Sunday school class space was built in 1975 on the south end of the structure. Then in 1978, an outside shell was constructed on the main floor level over the new basement partitions were put in, in 1981 with the church sanctuary being enlarged. A time capsule was buried during the centennial celebration of the church. The capsule is located between the church foundation and the basement. 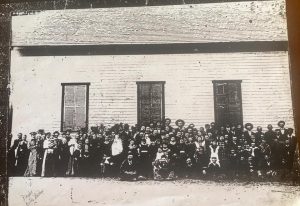 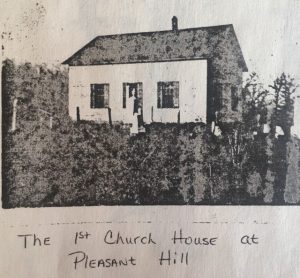 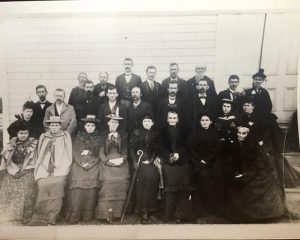